This sunday, 24th of April, will start the 52nd edition of the Tour of Turkey. This is the most important cycling race in Turkey and the only one with only professional riders.

The first edition was raced on 1963 with the name of Marmara Tour, to change its name to Tour of Turkey in 1968.

In 2008 the race upgraded its status from local 2.2 race to 2.1 level attracting a few of the best teams of the World. Two years later, in 2010, upgraded its level to 2.HC (The highest after the World Tour), welcoming even more teams from the cycling elite and completing its startlist with second division teams and a local team.

The race, from a cyclist point of view, was a 8 days long stage race with nervous routes and sprint finish. It was not until 2012 that a mountain finish was introduced in Goğubeli mountain pass. From then the winner was always a rider with climbing skills.

About Turkey, the 8 days run around the south-west coast of the country looking forward to show the most sunny and touristic region of the country. Just flying one day to start or finish in Istanbul. Since this format was inaugurated the Elmali – Goğubeli finish came to break the coast city finish pattern.  This year we will be able to visit Cappadocia too with an interesting circuit in a remarkable landscape.

Winners since the race acquired 2.1 status were:

This year tour will start in Istanbul to finish in Selçuk, near Izmir. 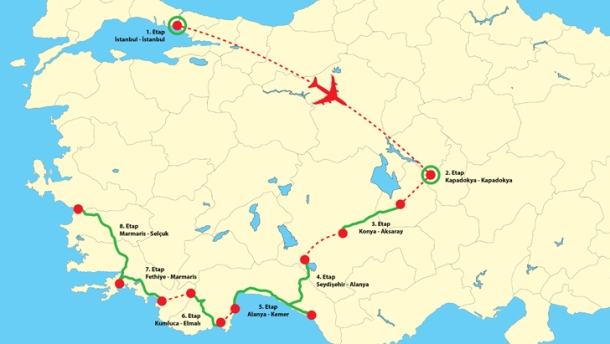 We will see some stages for sprinters, but at least 2 other stages with definitely another kind of profile. And the Istanbul beginning, in a sloppy road next to Sultanahmet mosque, where the last year we could see Lluis Mas beating Mark Cavendish in a thrilling finish.

As the official page does not show the profiles of the stage I made an approximation of them, where we can see what kind of route wait for us this year in Turkish roads.

The first stage will feature an excursion to the Asian side of the city through Bosphorus Bridge, just to come back and make 4 times a circuit in the city centre. Just a relaxed stage for sprinters if the last metres where not a sloppy cobblestoned road.

This is the biggest innovation this year. A circuit without a flat km. We are talking about 2500 of elevation gain the riders will have to climb. Potentially a very interesting stage that will show who is coming to win this race. (Do not miss the landscapes if too focus on cycling)

Flat stage in the highlands for sprinters if the breakaway does not say otherwise.

We arrive to the south coast. Second stage where the sprinters should beat each others.

With this stage we arrive to the typical and traditional stage of the Tour. ¿A flat stage for sprinters? Yes. But the roads of the south-west coast of Turkey are not as flat as they look in the profile. Enough to put the breakaways into competition. More than 1000m of elevation gain in a route that always runs parallel to the coast.

This is the traditional mountain stage of the Tour. A short road from the coast to 1800m. Here we will now who will win the Tour of Turkey.

Again here the sprinters will have their chance. Not to forget the chances of those who attack in the last hill.

Last stage. Last years here we had a short uphill finish. This year it looks like the route changed. Leaving a 3rd categorized climb just before descending to the finish. Probably the sprinters will have their end of race party, if there is no Lluis Mas to steal them the glory.

Participation is not definitive already. Last year winner, Kristijan Durasek, will come to defend his title though. Modolo will run the sprints for his team, Lampre. Greipel, Mareczko and the local rider Ahmet Örken will be the other riders fighting for the sprints. Lets see if Zanotti or Malucelli can be with them too.

For GC the riders who fight the title last year, Durasek and the old veteran Rebellin, start as favourites. Dani Díaz, Pello Bilbao or José Gonçalves are the other more known contenders. But there are few continental teams whose riders will have here the opportunity tho show themselves to the World.

This year look like the race has lost a lot of appeal due to the teams invited. Only two ProTour teams and 8 second division teams. 6 continental teams will join them. Here the startlist.

Ahh, I forgot, to find the leader of the race you have to look for turquoise jersey.